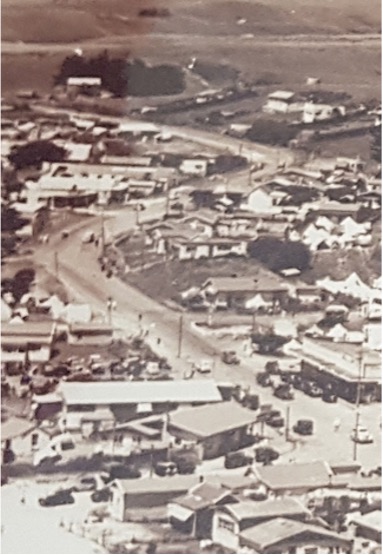 At the Fyfe Road and Beach Road intersection were the sites of first fish and chip shop in Waihi Beach, Cabaret  Dance Hall, the second Waihi Beach School and the Waihi Beach Volunteer Fire Brigade. 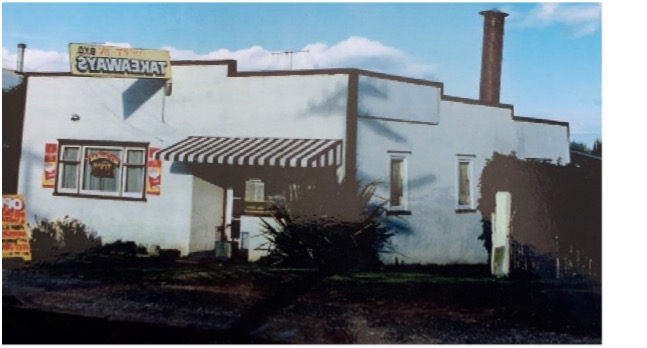 The Drift Inn fish and chip shop on Beach Road in the 1960s was in the same building as the original Crisps Fish and Chip Shop c1940s.

It later became the Drift Inn, and then in the 21st century the Hot Pipi. During the time as Hot Pipi and Beach Cafe, it has changed in nature from a fish and chip shop to a café. 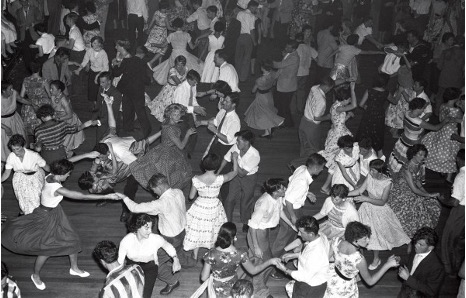 Where you are standing now was the site of the Cabaret, a dance hall, built by Jim Spoule in 1993.

After the 1950s it was taken over by Pat McLeay.

By this time it was competing with the RSA as a dance venue, and some patrons did both venues in one night to catch both dance bands.

The Cabaret was more popular among the younger, according to stories, as it had “more modern bands.”

From the outside it was a dull rectangular building, but inside was colourful and there were several large pillars around which people danced.

The Cabaret was demolished in a fire in 1970 and the site is now a reserve. 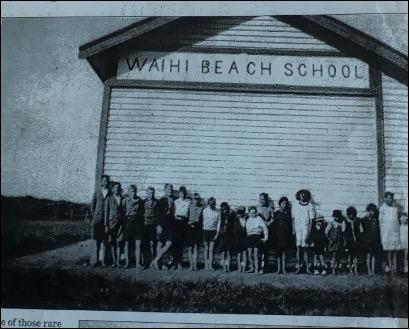 Classes were  held for several months in the dining room of the fish and chip shop while a one-room school was being built in 1929.

A second room was added in 1933, at which time the roll was about 30, many being children who travelled in a covered wagon along the beach from Bowentown.

The first beach school was opened in a small tin shed down near the current site of the Waihi surf club in 1909. It was Mrs Shaw’s old Homestead, which had been vacated for Dillon Street.

Teachers for the school were supplied by the East and South schools in Waihi. The first teacher was Miss Grey who was replaced a few weeks later by Dora Southward, whose five children boosted the roll. In 1926 Bertha Clarke (nee Nisbet) was appointed as the first fully trained and qualified teacher.

She remained until the end of 1929, during which year an assistant was appointed for the first time. 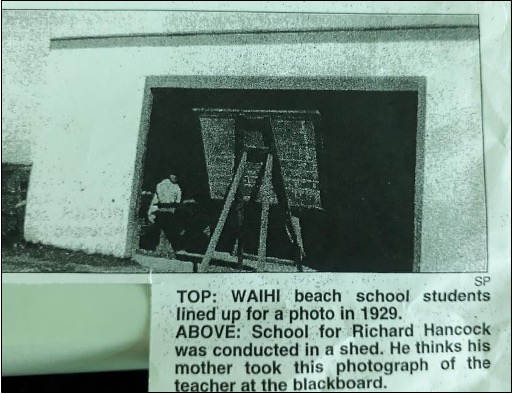 The school operated until 1957 with two teachers at that time.

In 1954  land was purchased nearby and in 1957 a new school was completed on the current  Waihi Beach School site.

The old two-roomed building was also moved to this site. Mr Hank Hanlen was the Principal at the time.

The children walked alongside the removal truck to its new site.

The building is still one of the classrooms at Waihi Beach School today. It has been modernised over the years to match the other classrooms.

The first fire engine, an old V8 Ford inherited from the Waihi Fire Brigade painted on the bricks of the Waihi Beach Volunteer Fire Brigade wall built in 1956.

In 1956 the fire station site in School Lane (now Fyfe Road) was bought for £500, a portable Scammell pump was purchased and plans for a 20 by 30 foot station were drawn up.

An elderly fire engine that had seen service in the Air Force during the war was acquired, and for its sojourn at the beach was parked in the open – either in Ocean View Road or in the Waihi Beach Camping Ground. It was considered fair game for vandals and eventually had to be towed by the council truck to get  started.

This continued for 10 years, until the Beach Brigade inherited another cast-off Waihi Brigade fire engine.

0.21 miles
Waihi Surf Lifesaving Club: Note that it was not named as Waihi Beach Lifeguard Services Incorporated until after 2010, after  all life saving clubs were drawn under a  national body Read more...

0.22 miles
Early camping Camping at the North End has always been popular, even in the days where there was  neither  road nor amenities. The earliest photographs show families in large canvas Read more...

0.15 miles
Development of residential housing in the Brighton Road area started as early as 1924. Brighton Park Reserve is marked north to the Leo Street sections. The area is significant today Read more...
View all