“Another early morning activity was the milkman. Fresh whole milk could be had directly from Mr Weedon’s dairy farm simply by putting your billy out each night with one or two shillings. The milk was ladled from a large milk can carried on a chariot-like trailer or sulky, pulled by a willing horse.” 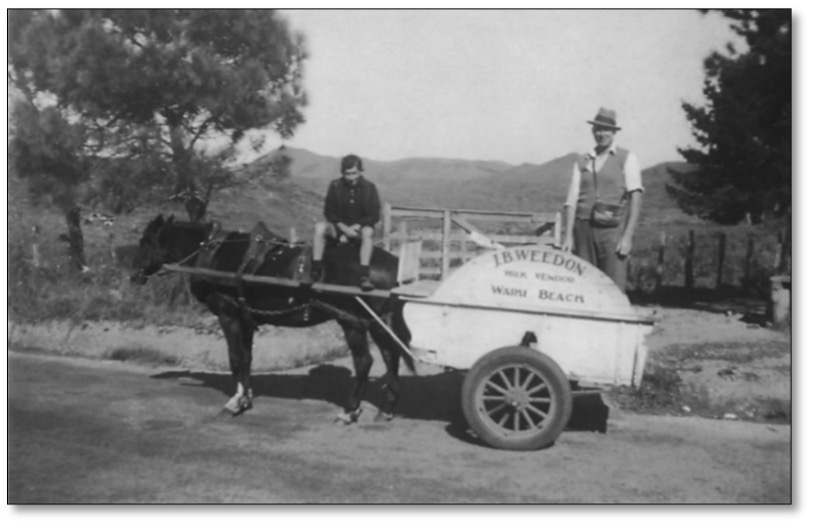 J.B. Weedon, Milk Vendor, at  Waihi Beach in the 1940s with his rousie are pictured where the Waihi Beach Hotel is today. His horse was also called Jack.

He milked twice daily a herd of about eighty jersey cows. The filled cans were trucked to Waihi, collected by the Thames Valley Cooperative Dairy Company and railed to Paeroa.

Jacks house was in the area of today’s G.A.S. Station  on Beach Road and the milking shed about a hundred  metres north on the opposite side of the road.

Evidence of these are no longer there, as the landscape changed from rural to residential in a matter of decades.

Jack put a bore down by the milking shed side, near the top of where Browns Road is today. It provided tepid water for the house. This water reputedly also ran the machines in the cowshed.

The bore was part of the same underground hot water providing the Top Ten Holiday Camp today and found under the Deverilles Golf course in the 1960s.(opposite the Waihi Beach Hotel today) It was tidal – cold when the tide was in and warmer when the tide was out. At best it was only tepid.

Jack drove his sulky selling milk to the locals and holiday makers at North End. In the thirties and forties  customers would bring their containers to the trap. Jack ladled out the required amount. Many people  remember buying his milk and cream at the camping grounds and surrounding baches in the 1950s.

In 1956 Jack took up another dairy farm in Katikati. The milk  run was taken over by William Murcott.  Bill had two four wheeled carts and a float, and in later years a van. When the cans were replaced by  bottles, Bill Murcott built a cool store in Hillview Road.

The farm was later leased to Mr Fowler Senior until it was sold to Stuart Brown in 1965.

The photograph does not clearly identify any specific local, although there is a suggestion that the tall man in the front was Jack Weedon. We know that among the group were Waihi Beach residents John Garde-Browne, Doug Littlejohn, Jack Cornes, Jim Wotherspoon, Charlie Brady, Ted Kinlock, Neil Christenson, Basil Hoyle, Neil Fergus, Jim Martin, Bob Mathers and Cory Thorpe.

The Waihi Beach Independent Mounted Rifles was under the 1940 Hauraki Squadron Troops, along with Whakatiwai and Turua. The captain was Bill Capamagian.

The patrollers role was to protect the coastline from being invaded by the Japanese – an area extending from Whangamata to Bowentown Heads.

Most were horse-mounted farmers who were exempt from overseas war service. Some came from the Waihi Beach area, but most were from farms along the Golden Valley.

Although they were supplied with pay, uniforms, rifles and army training, they had to supply their own horses. The government subsidised land girls to provide support for the wives managing the farms.

During World War Two there was a red shed (which originally stored farm implements) and marquee on Jack Weedon’s farm. This was their headquarters. Individual tents which were possibly abolution blocks were seen as well.

The group stationed themselves in the marquee after the regular night patrol. The troop would divide into smaller groups setting off to different places, leaving before sundown, and returning to report any findings, and to eat and sleep.

The patrol that headed south rode along the beach, and through Len Emerton’s Farm to the look out at Bowentown Heads to report any Japanese invasion and other activities related to the possibility of an invasion. An important part of the watch would be looking for lights far out to sea to spot enemy trying to sneak in from their boats.

There was only one report of a Japanese submarine seen during that time, and unsubstantiated reports say it was seen in the Auckland Harbour three days later. These accounts are not shown up on records as the military didn’t have the filing space to store them and threw them out.

Upon this sighting, to stop any Japanese tanks moving up the hill towards Waihi, a blue gum tree was lowered across the road. Cedric Mathers’ remembers his father saying that they found some concrete brackets in the quarry, and placed these on either side of the road.

Neil Fergus’s tractor was employed in the moving of the tree. A pivot was placed across the road in the brackets with the tree across it, and the tree was hoisted up and down with a winding lever to let local traffic through.

The patrols continued until the American bombing of Hiroshima and Nagasaki in August 1945.

Not being returned service men they were not permitted affiliation with the RSA and their post war activities were undertaken in the Waihi Drill Hall instead.

0.36 miles
Waihi Surf Lifesaving Club: Note that it was not named as Waihi Beach Lifeguard Services Incorporated until after 2010, after  all life saving clubs were drawn under a  national body Read more...

0.38 miles
Early camping Camping at the North End has always been popular, even in the days where there was  neither  road nor amenities. The earliest photographs show families in large canvas Read more...

0.15 miles
Development of residential housing in the Brighton Road area started as early as 1924. Brighton Park Reserve is marked north to the Leo Street sections. The area is significant today Read more...
View all