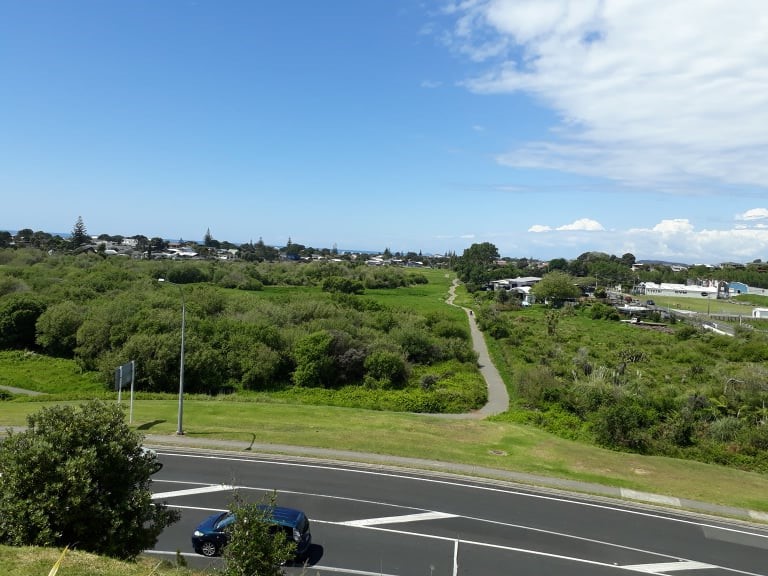 Most of the land in the northern half of the Wilson Estate was originally swampy, with knolls of raised ground. This was especially so in the area called the Broadlands.

In the 1930s Neil Fergus, a neighbouring farmer, and two of Mrs Shaw’s workers formed a drain across the swamp. This drain facilitated both land development, and assisted in draining areas of land for farming.

After Martha Shaw bought the land from George Vesey Stewart in 1901, she asked  Fenn Haszard to take the levels to see it was possible to drain the swamp by cutting a canal through the sandhills to the ocean. It was possible and so Two Mile Creek was born.

Today the Broadlands Reserve drains approximately 500 hectares of residential and rural land. It also acts as a buffer/ storage area for stormwater flowing into the creek.

A local who played in the swamp as a child recalls it being mostly manuka and their thin black trunks made the area  seem “spooky”. She remembers an abundance of moreporks.

A Broadlands Steering Committee is currently revitalising this area as a wetlands.

South of the Waihi Beach Hotel which is pictured along the pathway was a swamp pa, known as Te Mata, and a name change from Broadlands to Te Mata is currently being considered to reflect this.

0.87 miles
Waihi Surf Lifesaving Club: Note that it was not named as Waihi Beach Lifeguard Services Incorporated until after 2010, after  all life saving clubs were drawn under a  national body Read more...

0.9 miles
Early camping Camping at the North End has always been popular, even in the days where there was  neither  road nor amenities. The earliest photographs show families in large canvas Read more...

0.6 miles
Development of residential housing in the Brighton Road area started as early as 1924. Brighton Park Reserve is marked north to the Leo Street sections. The area is significant today Read more...
View all