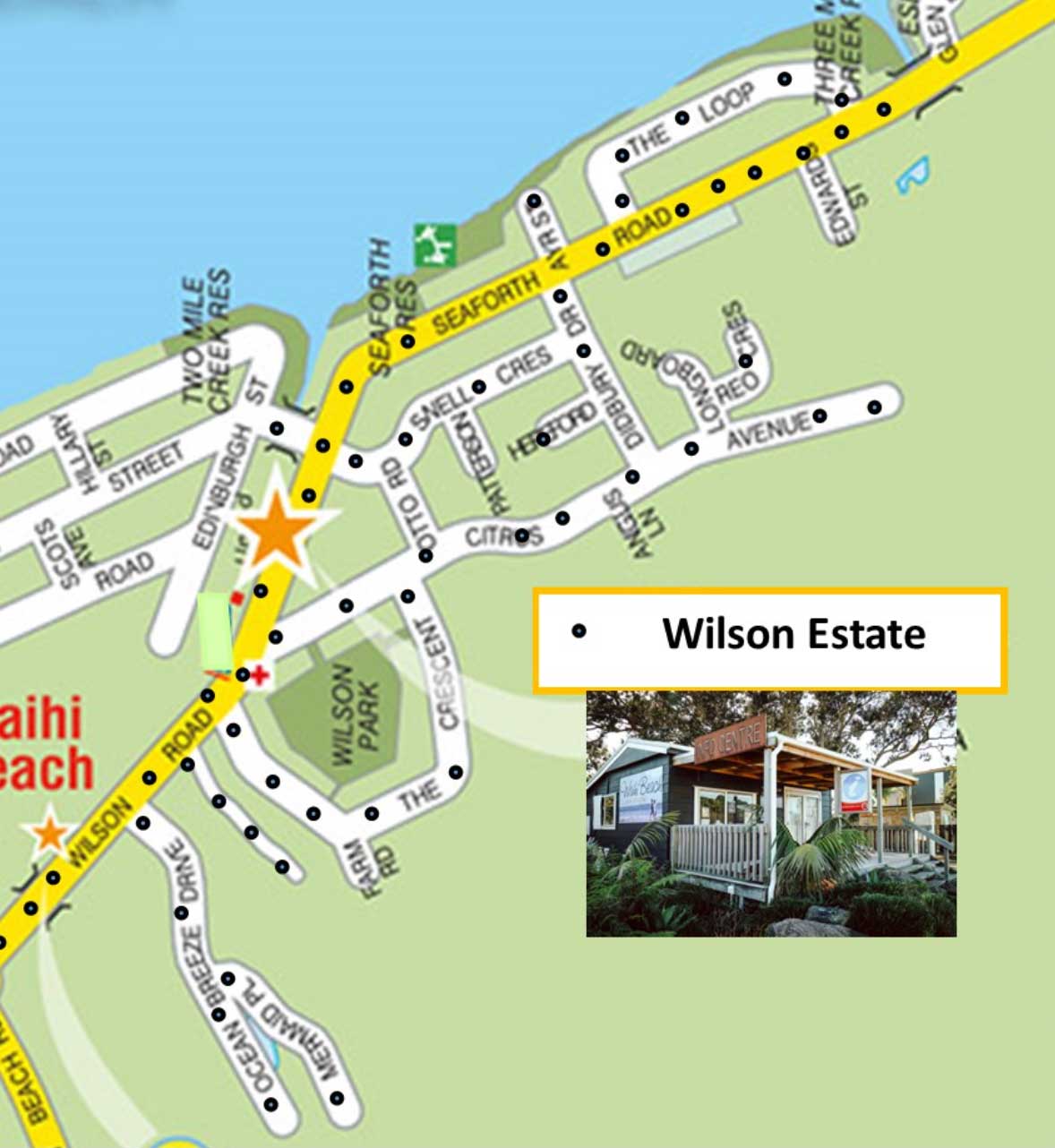 Wilson Estate, as depicted on the street map, is  named after E. A. Wilson who bought the land from Martha Shaw in 1939.

The land, called the “Peninsula,” was originally swamp land with knolls of drier land.

After farming the Crescent for nine years he subdivided land both  sides of Wilson Road and Seaforth Road between the boundaries of the Broadlands and Island View Reserve.

Mr. Wilson had been a dentist in Waihi since 1907 and served World War One. There is a story that when the land came up for sale, the Waihi dentist was encouraged by his friend Otto Bjerring to put in a low offer and to his surprise he got it.

Farm Road was the road to Mr Wilson’s farm, and the Crescent was a dirt road down from the house to the Wilson Road. 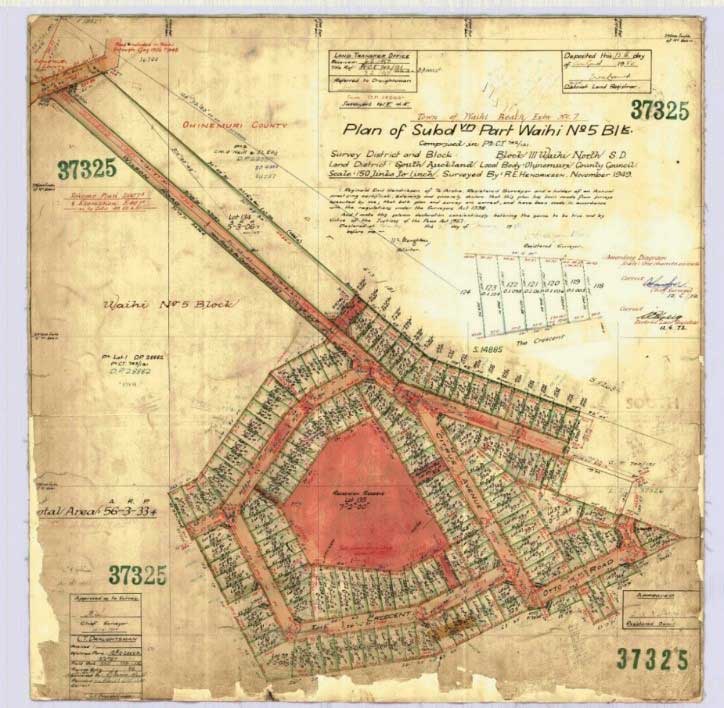 Bill Wilson, as he was known, developed The Crescent  in 1956.

He donated the centre of the development as a reserve: Wilson Park.

“As children  my brothers and I fished for eels in Two Mile Creek behind what is now Bob Quantrill’s house (44 Wilson Road).

Bill Wilson built a farm managers’ house opposite where the sub-station is now on Wilson  Road.

From the Main Road, just west of where the hotel is today, we had a gate across the road to keep the stock in, and before the hotel was built we had a cutting to go through.

One of the first residential buildings in the Estate was a shed that my dad and Jack Angle cut in half in Newman Street, Waihi, where we lived. Jack transported it to the Beach and set it up at 8 The Crescent in 1949. 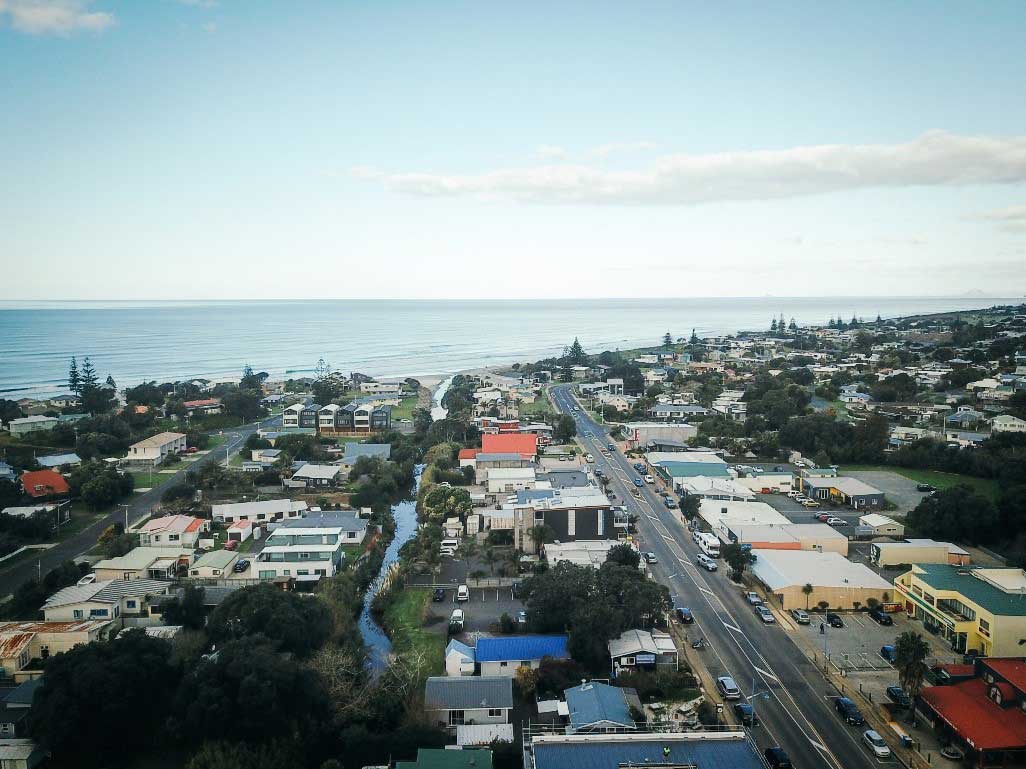 The village shown as its 2020 geographical location.

Two Mile Creek behind the village drains the water from the Broadlands to the Waihi Beach Ocean.

Until 1990 the Village was zoned residential. However since the 1960s it had become a mixture of residential and commercial buildings.

Beach Grocers now sits on the site of a Four Square. Behind Beach Grocers, or possibly under, was the spot where the first shop in the street was built in the forties by Les Brown – the barbers.

The Porch was adapted from the home of Bill Hollis who still lived there in 1980.

Next to the current bakery was the home of Sister C. Campbell which was a café in the 1980s. It was not deemed compliant and suspiciously  burnt down. On this spot in 2000 Sue and Rob Hope built the Home Hardware and moved their business from one end of the street to the other.

The original chemist shop was where  Waihi Beach Gallery is today. This building was built by Brian Baines and in 1983 the first medical centre was opened in rooms behind the chemist by Dr and Bev Wijitunga. By the time the doctor had retired the medical centre at the corner of the Crescent and Wilson Road was in operation.

In 1993 the Op Shop moved to the village before the north end shops were demolished.

Forty years later the buildings remain the same but most of the businesses have changed owners and trades. There are new buildings on the northern and southern side of Wilson Road.

However “The Village”, as it is affectionately called, has retained its  beachy small town look and feel. 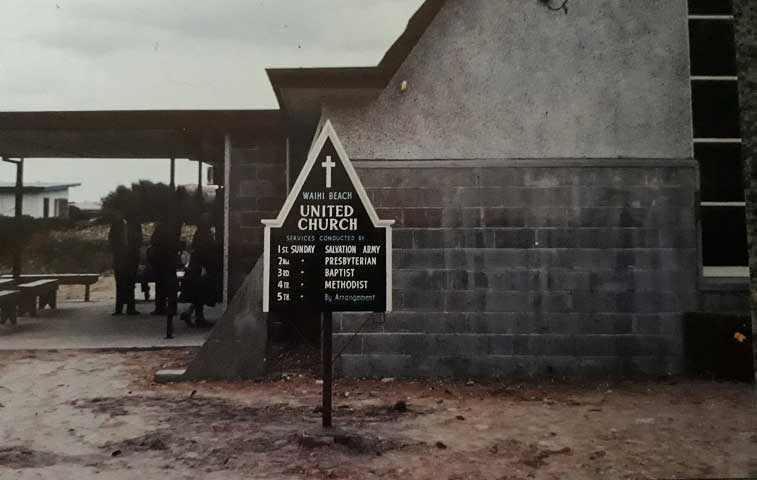 Waihi Beach United Church: Opening Day 17 September 1960. The carport was made into a foyer in the 1990s.

Members of the Presbyterian, Methodist, Baptist and Salvation Army churches initially held services in houses, tea rooms and even the picture theatre.

The land was donated by Mr. Wilson and a bequest of £500 by Mr. W.J. Nicholson kick-started the fundraising.

Fred Hawkins drew up the plans, his staff erected the steelwork and the rest was built by volunteer labour supervised by Neil Fergus.

The first information centre was opened in December 1993 in the old medical rooms behind Brian Baines’ chemist shop.

It was manned by a committee and volunteers.

Most of the funding for the centre came from the original Waihi Beach Progressive Society.

When the building was no longer available Charlie the caravan was leased from Ian Smith and towed during the peak seasons to different venues. 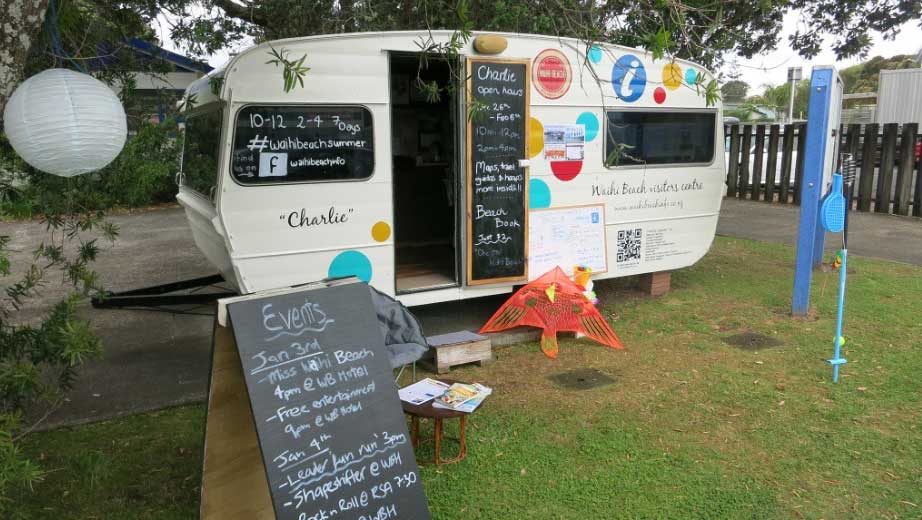 It was a well known centre because of it’s quirky character. Volunteers sat outside on deck chairs and generally chatted to all and sundry.

As it’s wheels began to deteriorate  it spent it’s last few years in a permanent site in front of the Waihi Beach Police  Station where the Information Centre is today. 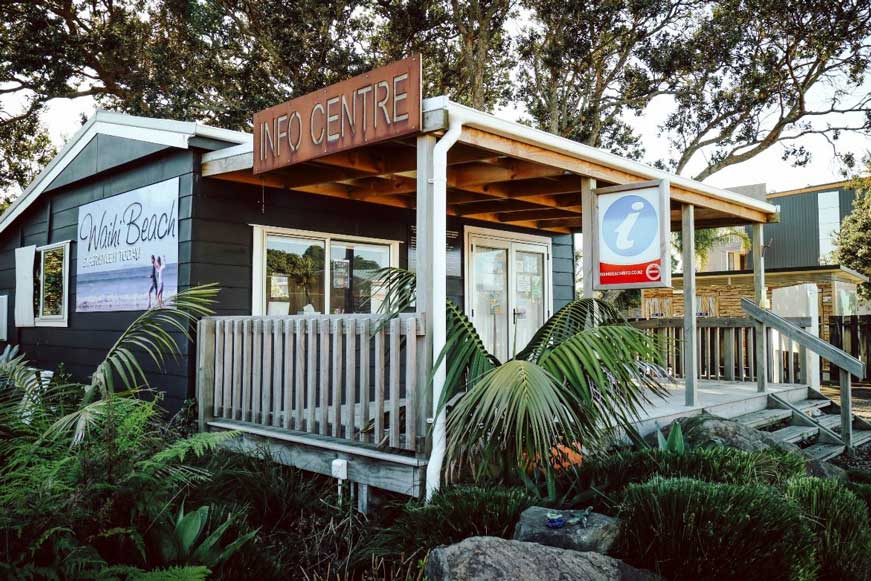 In 2016 The Waihi Beach Information Centre was transported from the Flat White back section and installed mainly by volunteers.

The building was funded by the Waihi Beach Community Board.

It is believed that it was the original home of Mr Hitchens Senior built in the late 1940s when the Hitchens’ managed the store. It had been renovated prior to being resited, and at that time it still had the pull down shutter model of front window common in the 1950s.

The veranda was added about a year later.

The garden was donated by a local business and is now maintained by Council and volunteers.

The services and facilities are provided by a trustee committee, local volunteers and two funded coordinators.

0.96 miles
Waihi Surf Lifesaving Club: Note that it was not named as Waihi Beach Lifeguard Services Incorporated until after 2010, after  all life saving clubs were drawn under a  national body Read more...

1 miles
Early camping Camping at the North End has always been popular, even in the days where there was  neither  road nor amenities. The earliest photographs show families in large canvas Read more...

0.69 miles
Development of residential housing in the Brighton Road area started as early as 1924. Brighton Park Reserve is marked north to the Leo Street sections. The area is significant today Read more...
View all