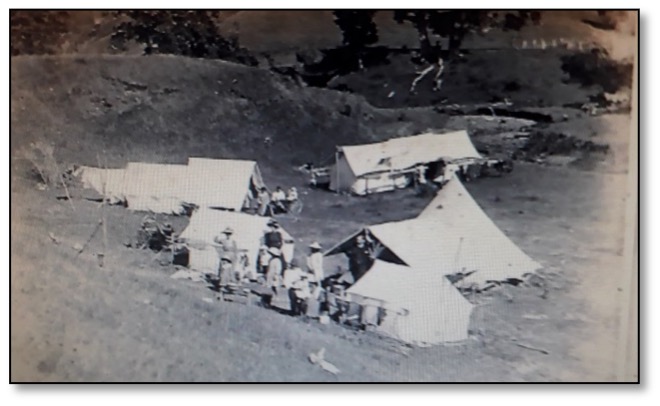 Camping at the North End has always been popular, even in the days where there was  neither  road nor amenities. The earliest photographs show families in large canvas structures enjoying the beach. They came over the hills on horseback with their supplies and set up on the dunes.

The Judkins family  camped  at Waihi Beach about 1911 with the Watsons. The site is looking towards the north end of the beach. 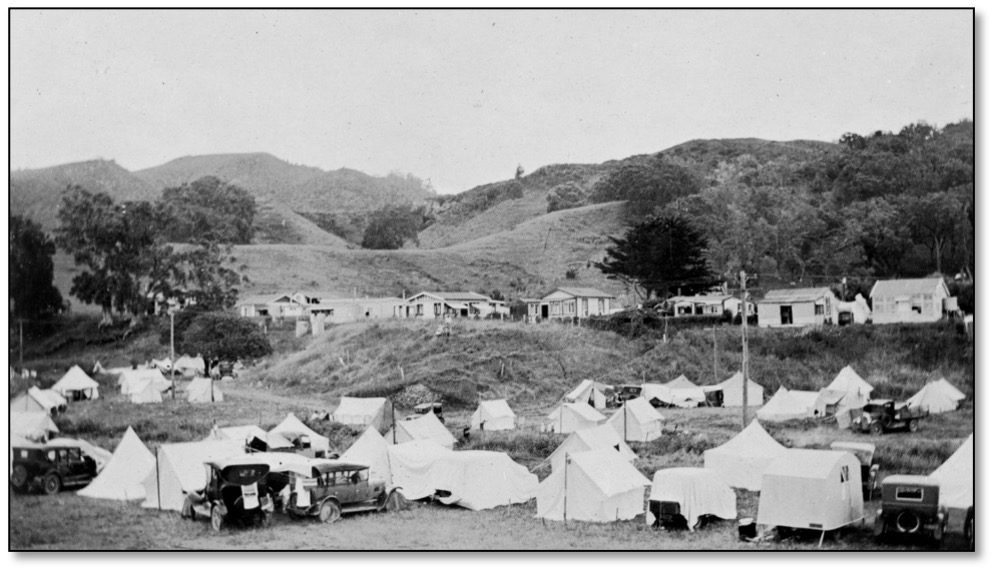 By the 1920s camping areas were organised in ad hoc clusters along the shoreline. The ride for those who had cars was a bumpy one due to potholes in the poor road. 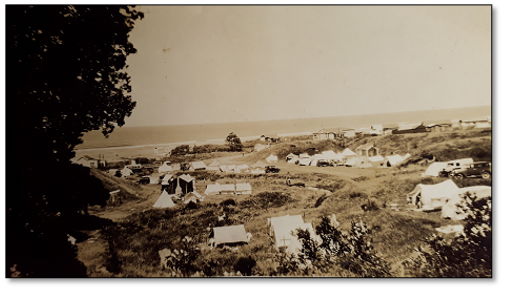 In the 1930s tents were dotted across the area from Ocean View Road to the foreshore. 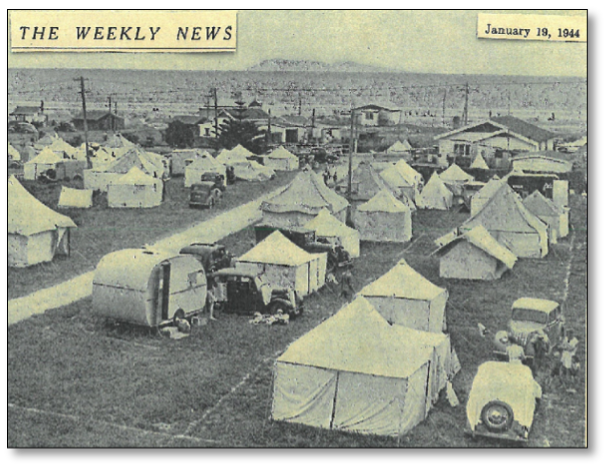 It is believed that the holiday camp where Top Ten is now was one of the oldest in the country, opening in 1899. This picture was taken in the 1930s.

The St Johns Ambulance House/ First Aide room is the round topped tent in front of the house.

The first three lease hold owners of the camping reserve, where The Top Ten is now, were staff of the Ohinemuri County  Council: J Moon, Alf Sparks, Bill Witherspoon and in the 1950s L Toms.

In the 1930s the ablutions block consisted of army like latrines of series of cans with a lid seat. There were only six ladies and six mens, which certainly were not enough in peak seasons. The stench and blowflies rendered visits only when necessary.

The cans were emptied at about midnight by a night cartman, a local and his horse.

The shower blocks ran  cold water. Warm water came from a copper housed between the cookhouse and ladies’ washing room. Campers would feed the fire underneath with wood to keep the warm water supply ongoing in the kitchen.

The cookhouse was a long building with a row of wood burning stoves standing back to back in the centre with sink benches on opposite walls.

The rowdier groups  L. Tom would place on the bottom level. This was referred to as the “bull ring”, next door to the first aid tent.

The girls groups were placed in the centre, and boys groups along the creek, probably nearer the toilets.

Holiday makers would come from as far as Auckland or Hamilton by train, or in Bonnici coaches. Some campers would bring their own tents, some would hire them from Waihi.

The singles groups were there for the social life: sitting on the beach or swimming, hiring Fac’s lilos, taking in movies, walking to Orokawa Bay of Bowentown and dancing at the Cabaret or RSA until midnight.

The PA system announced when bread and milk had arrived and what the days’ events were. Afternoons were spent preparing for the dances and mornings sleeping in because of the previous late night. 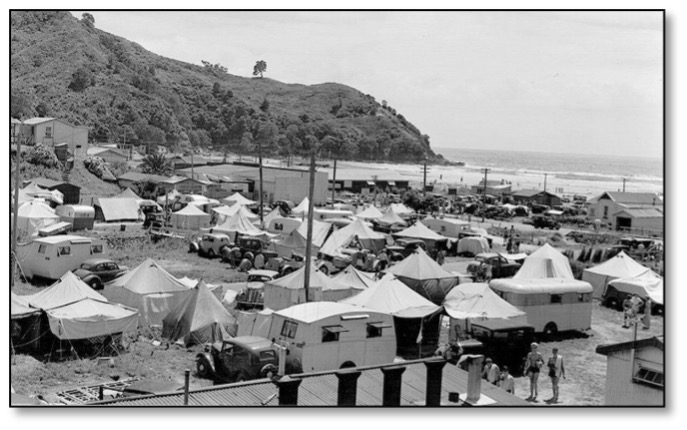 By the 1950s Waihi Beach was a thriving holiday destination.

Several  buses (Bonnici Coach Lines and later Hamilton Buses) brought Hamiltonians over every Sunday through the summer and parked on the beach.

Campers spread themselves along the council camping area and overflow in Ocean View Road. Those who could afford to built their own baches, or rented existing cottages. All activity occurred within one square mile.

Today the camping area is confined to the Top Ten. Residential houses are now in the spaces tents and baches once dominated. 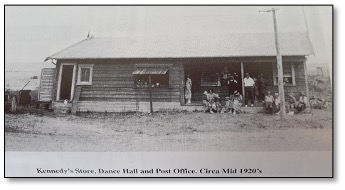 Mick Manning, an engineer of the Waihi Beach Mining Company, built one of the first stores at the beach.

It stood in the corner behind the Punga Band Rotunda at Pohutukawa Park and was purchased in 1925 by Clarrie Kennedy who moved it to the foreshore of Beach Road.

In its early years it was a store, a dance hall and a post office. In the eighties the business was known as Spencers.

The commercial area in the 1930s was still seasonal.

This photograph shows activities there on boxing day, 1931.  The largest store is Kennedy’s which  had pinball machines and “boogie boys”. Parents forbad their daughters to frequent it. 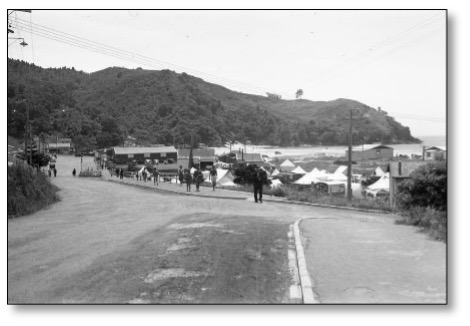 There was little development in 1945 because of World War Two. Things were quieter at the beach. 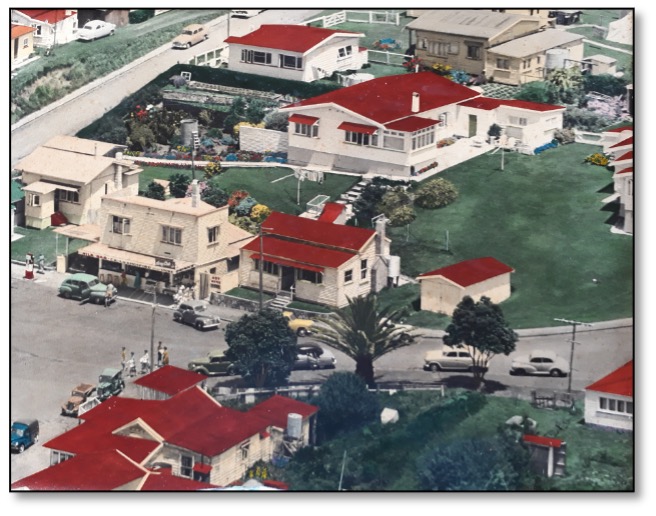 In 1952 the north end suddenly had a new commercial area. The set of buildings, constructed c1900, were  moved from Seddon Street, Waihi, transported out to the north end by the  two Miss Mullins’.

A painted photograph from the 1950s where a roundabout is now shows the Mullins’ stretch on the southern side of the road, and Ted and Addie Brown’s dairy, the white building, on the northern side.

Next to the camping ground was the first bakery owned by Bormans of Hamilton, Percy Starks butchers shop and Eileen Andrews’ haberdashery.

Ted and Addie Brown’s shop sat like the others on the footpath and business was done through a pull up and drop down shutter window. Ted looked after a vegetable patch which provided produce for the shop, and ran a taxi service between Waihi and the beach.

Earlier Mrs Cecilla Burke managed a restaurant opposite Spencers called Te Whare. This was known as the Mullins’ Big House. At one time it was an ice-cream dairy and also a bank. Next door was the Isa Lei Tearooms. This building is still there today as a residential property. On the corner of Pacific Road was the Post Office. 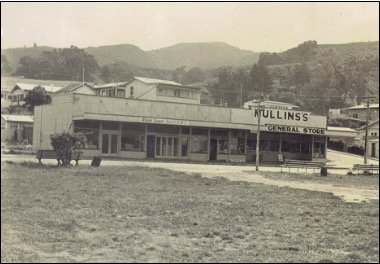 The Mullins’s general store in the 1960s on the corner of Pacific and Beach Road. 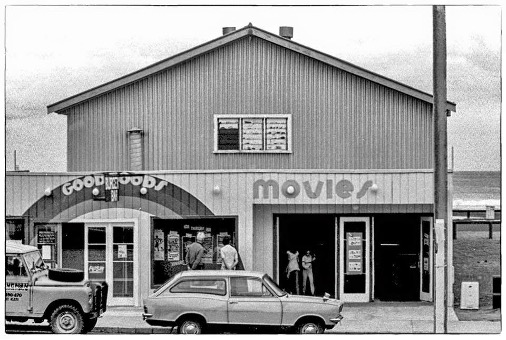 The picture theatre built by the Clarkes’ was there until the mid nineties. The theatre was rebuilt by Des Spiers in the early 1960s for Ruskin & Margery, who had a chemist shop at the front. 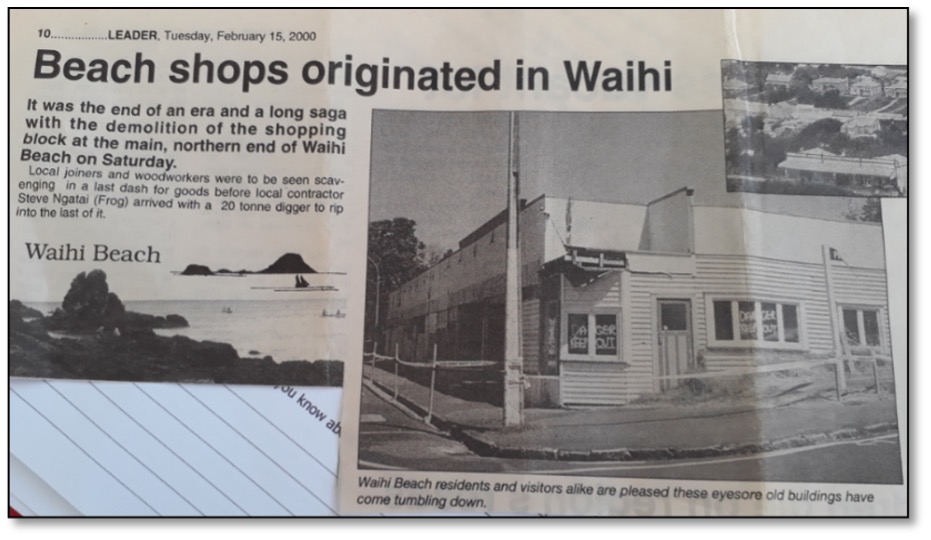 “It was the end of an era and a long saga with the demolition of the shopping block at the northern end of Waihi Beach last Saturday. Local joiners and woodworkers were seen scavenging in a last dash before local contractor Steve Ngatai ( Frog) arrived with a 20 ton digger to rip into the last of it.

A crowd formed and locals looked on as the machine crushed and tore at the remains of the buildings  which had become an eyesore and a thorn in the side of many residents.

Originally earmarked for demolition last year, the process was delayed when objections to the replacement development, an apartment block, held up planning proceedings. Also originally part of Waihi’s Seddon Street frontage, these buildings were shifted out to Waihi Beach by Johnston and Limmer House Removals a few years before the mine closed in 1952. Even at that stage they were no longer operating as retail businesses.

The Missus Mullins’ commissioned the shifting of the buildings and they had a general store. Later proprietors were Arthur Kinns and Jerry Paul. Percy Stark had the first baker shop in Waihi Beach and there was a part time butchery which was supplied from town and run by Fred Poole. Later Clive Calcott and after a while Des Huges operated the shop.

Henk Postmaa had a photo shop in the premises on Pacific Road corner and there has been what Mr Hanlen describes as “various summertime things” such as Alf Fowler’s surf shop, and a seasonal burger bar operated by John Pipe. Fowlers Menswear had an outlet there to catch the summer crowds. It also had an OP Shop, a second hand book shop and Rick James had a cane furniture workshop there.

Mr Hanlen said it was ”like a rabbit warren” and “architectural nightmare” and the fire brigade used to go through it once a year to familiarise themselves. John Pipe says that the rumours that a four story casino and massage parlour complex are unfounded.”

Today the main commercial area is in Wilson Road, locally  known as “the Village.”

269 feet
Waihi Surf Lifesaving Club: Note that it was not named as Waihi Beach Lifeguard Services Incorporated until after 2010, after  all life saving clubs were drawn under a  national body Read more...

0.3 miles
Development of residential housing in the Brighton Road area started as early as 1924. Brighton Park Reserve is marked north to the Leo Street sections. The area is significant today Read more...

0.65 miles
The first commercial building in the extended Shaw Road was a grocery store.  The shop was built Mr McCormach in 1948. The store was run by Mr Shaw, who was Read more...
View all