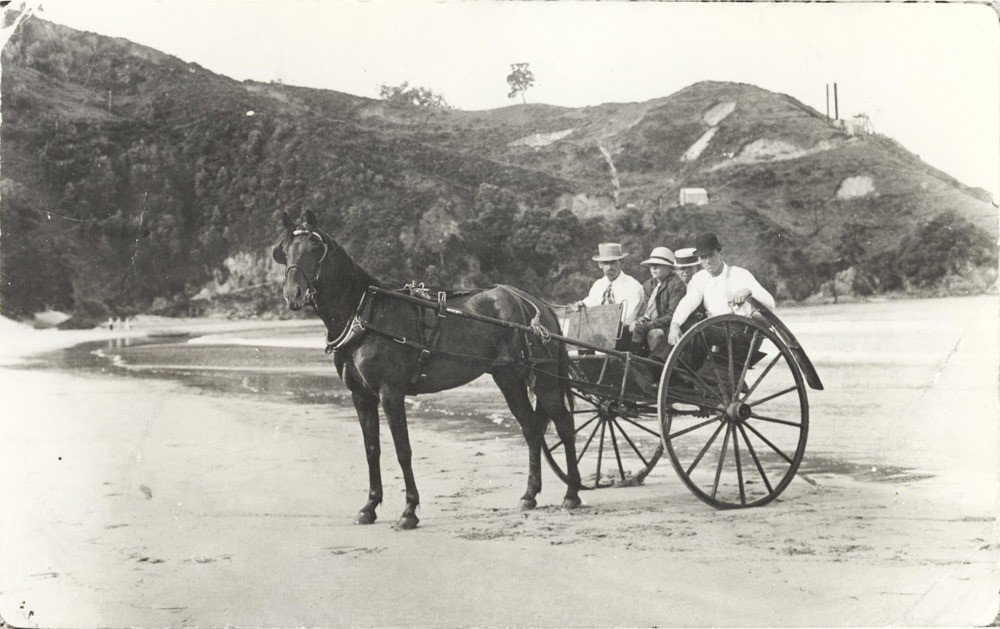 The nearby hut (directly above the figures) may have served as a blacksmiths workshop and assay home.

Claims for mining were amalgamated in 1898 by the Waihi Beach United Gold Mining Company.

A boiler and steam engine powered the poppet head and dewatering pumps. All equipment was bought in from Waihi through the Athenree Gorge and across the Athenree Ford to Bowentown, wherefrom horses transported them up the beach at low tide. Coal was brought in by a scow and dropped at Pio Point and transferred to the mines the same way.

In 1901 George Vesey Shaw sold the 150 acres, including Orakawa, to Martha Shaw. Her husband James William Shaw managed  the mine.

The mine was never successful and work came to a standstill when an underground stream caused serious flooding. The 90 horse – power Cameron pump failed to cope with the increasing flow and the mine was abandoned in 1910. The company went into receivership the following year.

Martha Shaw donated  Orokawa Reserve to the Ohinemuri County Council in 1941, which  since 1989 has  owned by the Department of Conservation. 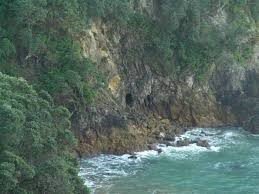 Little evidence remains now of the Waihi Beach United Gold Mining Company’s attempt at gold mining. All buildings and machinery have gone. The shaft has been filled in.

However the shaft site is still identifiable from the associated excavation into the hillside and the old access road, which was paved with pieces of quartz in places, and forms part of the Orokawa Bay walking track. Most of the small prospecting adits along the coastal cliffs are still in reasonably sound condition, particularly those at Oukori Bay. 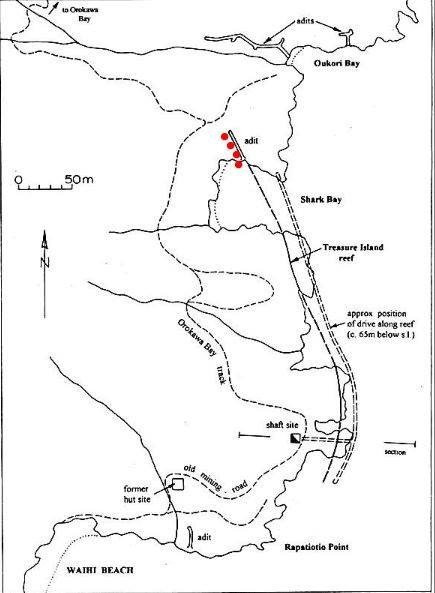 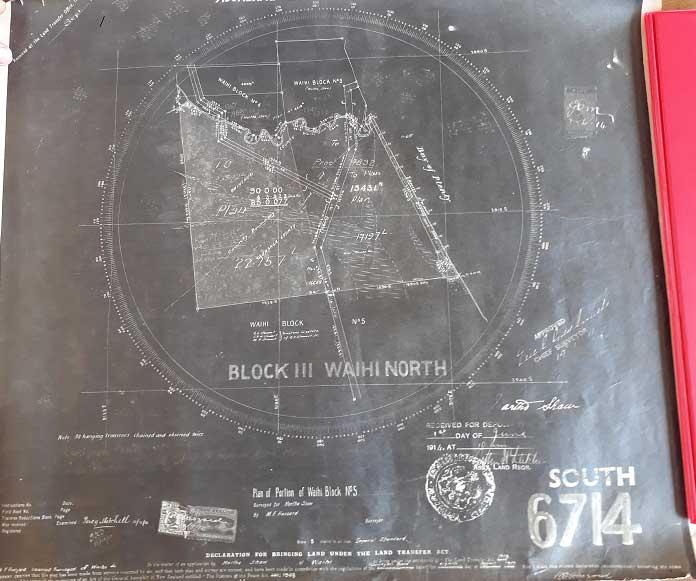 The land was purchased by Martha Shaw in 1900. It spanned  from the Orokawa Reserve to Three Mile Creek.

In 1920 the Ohinemuri Borough purchased 76 acres to develop a health and recreation resort for the miners of Waihi, the premise being that sunshine and sea air would alleviate the effects the quartz dust was having on their lungs (Miners Phthisis).

As the Shaw family and George Vesey Stewart were reluctant to sell, the Mayor and councillors obtained possession by invoking the Public Works and Municipal Act.

The Borough in 1923 then subdivided the purchase into 297 very small leasehold sections.

Initially Martha Shaw leased areas along the foreshore and around Pohutukawa Park to holiday makers. 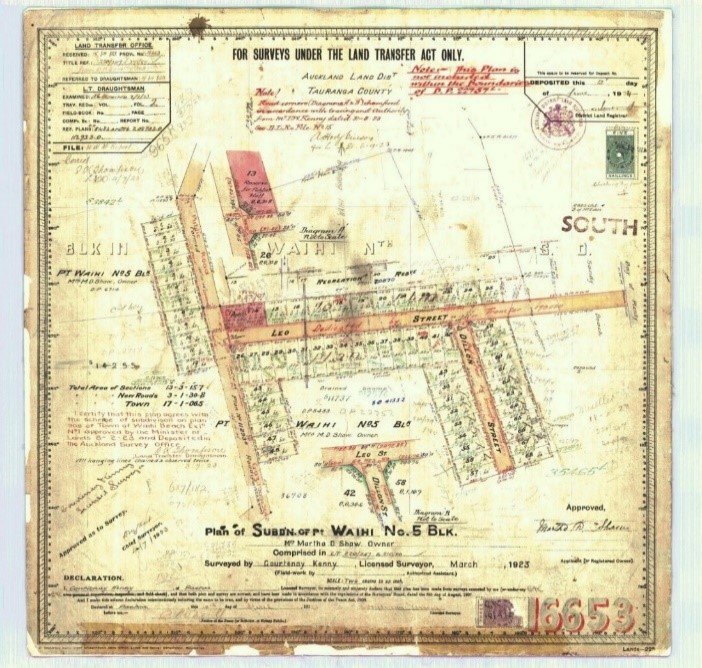 By the end of the 1930s Martha had developed the northern side of Beach Road from School Lane (now Fyfe Road), to The Terrace, inclusive of Ocean View Road, Pacific Road, Seaview Road,

On the southern side of Beach Road it was inclusive of  Hinemoa Street, Marine Avenue, Scarborough Road, Leo Street, and the first half of Shaw Road and Dillon Street to Coronation Park. 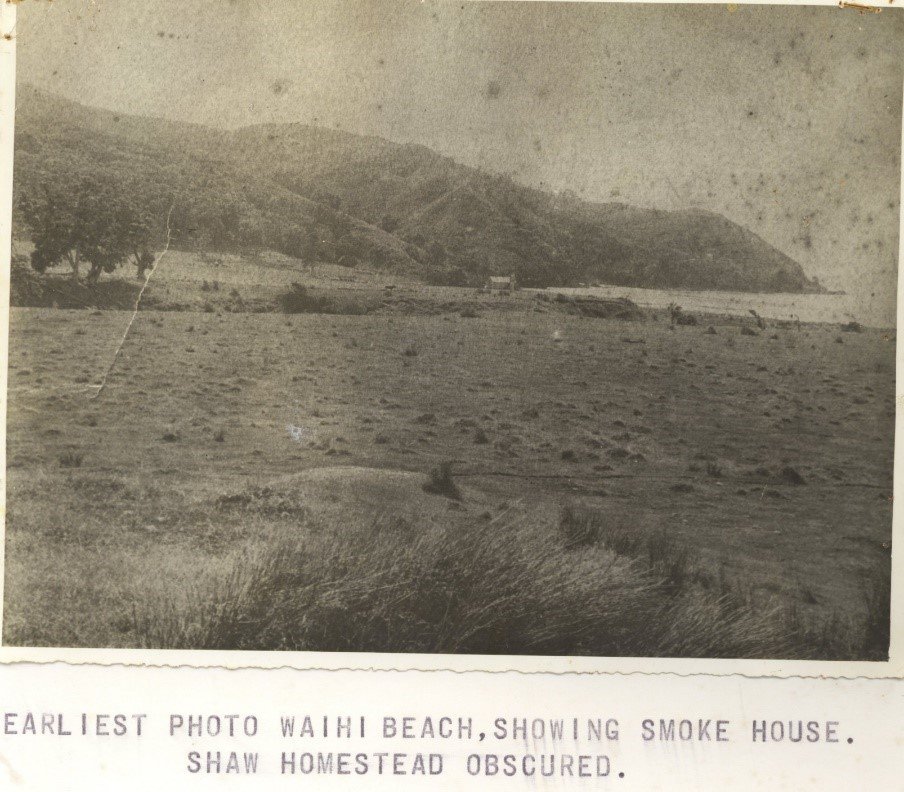 The Shaw’s originally lived where Pacific Road is now, and the building  later  became the first school in Waihi Beach when they moved to Dillon Street.

The building we see in this picture was the laundry and  toilet facility at the bottom of the section.

During the period of her land ownership Martha had: 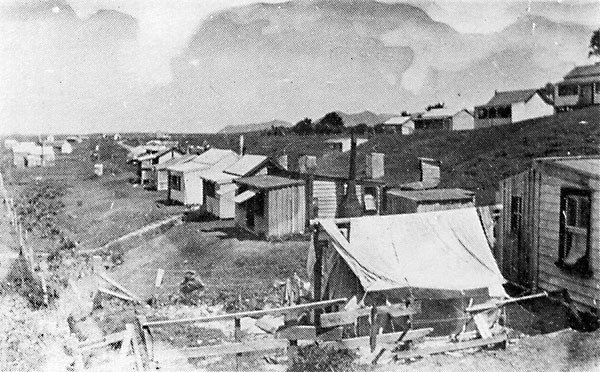 Leasehold Cottages along the foreshore of Waihi Beach c1910. 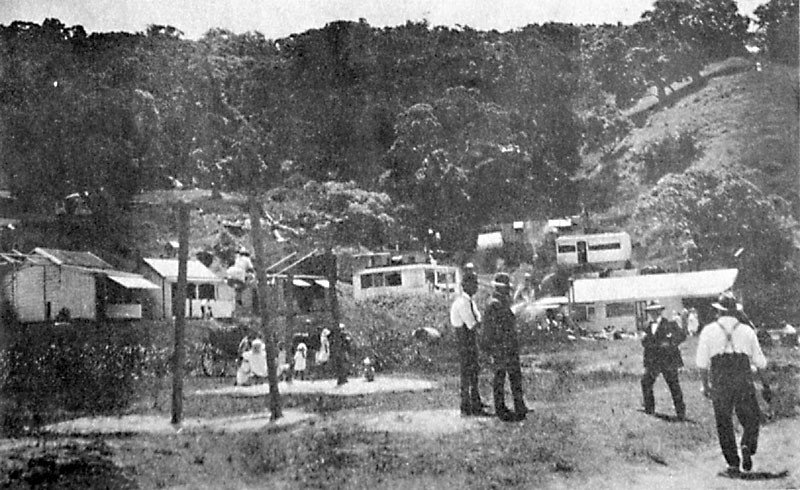 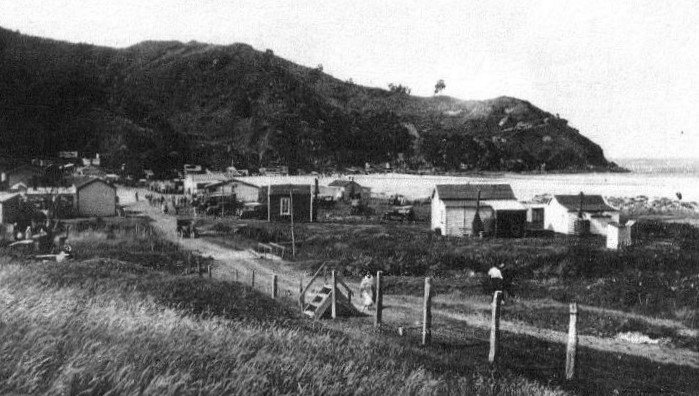 Baches along the foreshore in the 1920s. 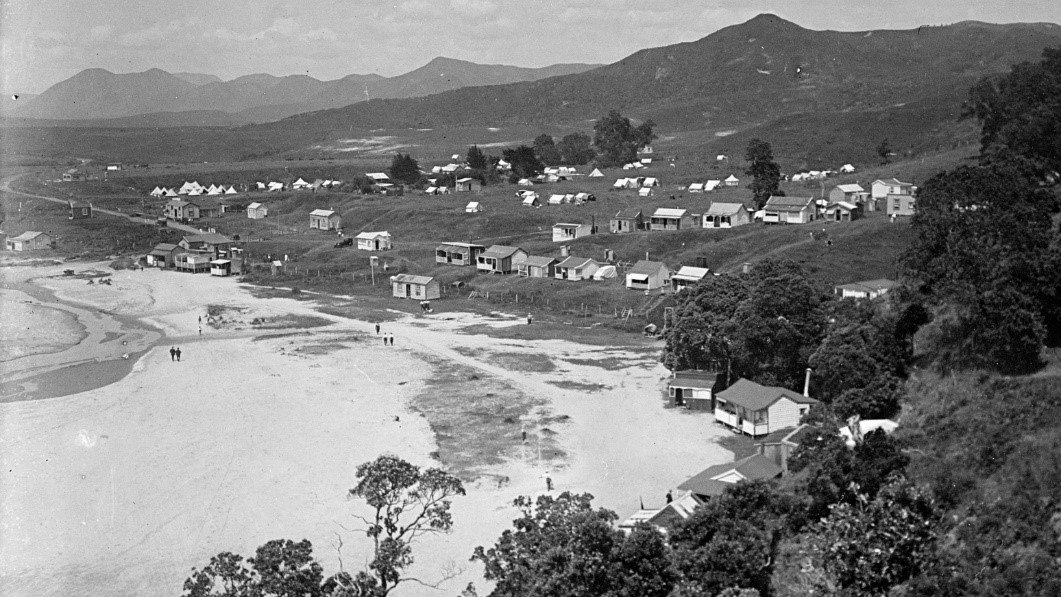 Baches  can be seen along the reserve at the north end and some along the area to where the Orokawa sign is today. 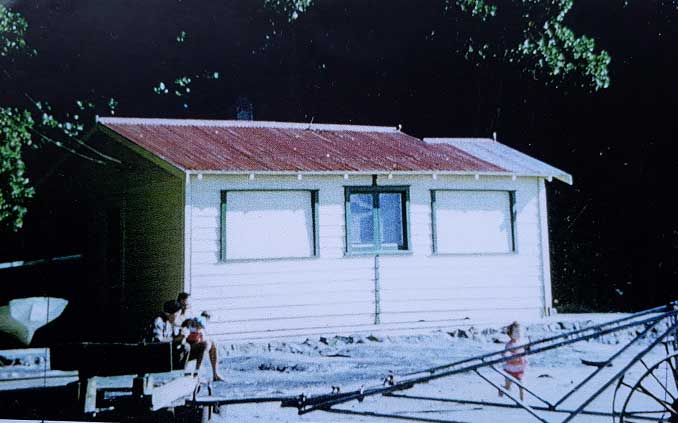 The Dillimore bach was situated where the rope swing is now.

The 1930s bach was a simple weatherboard building with three rooms: one large kitchen/living room and two bedrooms. There was an open fire on the wall to the back on the right hand side where a kerosene tin sat waiting for the fish of the day.

The second room was the parents bedroom and the next room was a children’s bunk room. Extras slept on the veranda which ran the length of the front of the house.

There was no electricity. Pink candles stolen from the Waihi mines  provided light.

Water was collected in another kerosene tin from the creek between the Dillimore  bach and the other north end baches.

The Morrison bach was bought from Oliver Pipe in 1948.

It is still on the reserve today.

The milkman delivered the milk by horse and sledge in the mornings coming over the sand where the car park is now. He ladled the milk out of the cream cans into our large billies and for special occasions there was an order for cream.

Fishermen stored their wooden boats in pipe cradles outside the bach. Fish was sold on the beach from the boats and  no matter how scarce schnapper was there was always a couple of good sized ones for our family.

There were little outhouses up the path. The night cart came at dusk and if someone  wanted to “make a visit” near that time someone else had to be “on guard.” There was quite a smell from the night cart.” 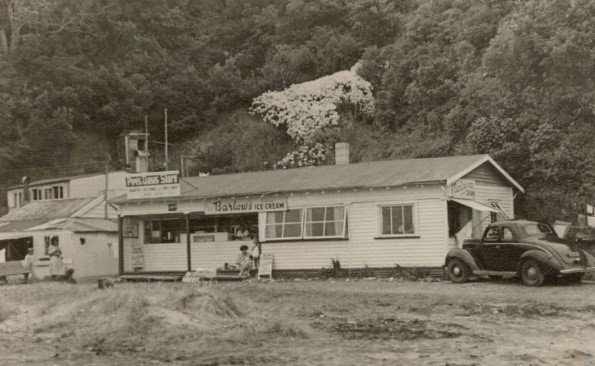 Oliver Pipe’s home and business, purchased in 1948, was one of the last two to be removed by the Western Bay of Plenty District Council in 2013.

The photograph shows it in the very early 1950s the Oasis tea rooms and ice cream parlour. Oliver Pipe’s wife is seen sitting with her baby Noeline and daughter Mary behind her.

By 2012 there were  only four baches remaining on the far north end.

The two on the right, belonging to Oliver Pipe and Bonnie Pipe, were removed in 2013, being health hazards.

The white and green bach remaining  originally belonged to the Coffeys and then Harold Oates. It  was  sold it to the Western Bay of Plenty District  Council in 2010 and is leased to the Waihi Beach Boardriders.

The blue roofed bach  beside it has been in the Morrison family since 1948, after being sold to them by Oliver Pipe to build the red building on the right.

0.12 miles
Waihi Surf Lifesaving Club: Note that it was not named as Waihi Beach Lifeguard Services Incorporated until after 2010, after  all life saving clubs were drawn under a  national body Read more...

476 feet
Early camping Camping at the North End has always been popular, even in the days where there was  neither  road nor amenities. The earliest photographs show families in large canvas Read more...

0.39 miles
Development of residential housing in the Brighton Road area started as early as 1924. Brighton Park Reserve is marked north to the Leo Street sections. The area is significant today Read more...

0.72 miles
The first commercial building in the extended Shaw Road was a grocery store.  The shop was built Mr McCormach in 1948. The store was run by Mr Shaw, who was Read more...
View all