Emerton Road, built in 1951, was named after Len Emerton. Johnny Pio was hauling his “full milk” across the Ford to get it to Katikati. Len Emerton and Doug Littlejohn were taking their cream to a depot in Brewers Park.

The Thames Valley Dairy Company based in Paeroa decided they would only come as far as where  Ross Goudies farm stands now to collect the cream. Tauranga County chairman Harry Capamagian initiated that a road from Steeles Road to the beach be built.

After Emerton Road was built they all supplied full milk to the Katikati Dairy Company instead which did away with separators.

Len was born and raised in Cheltenham, England. He went to World War One with the 3rd Canadian Battalion. After recovering from injuries sustained on the Western Front he joined the Royal Flying Corps and trained as a pilot, serving the war out flying a Sopwith Camel.

The Emerton family purchased the farm in 1936. At this time they were living at Tanners Point whilst Len was undertaking work in the Athenree Forestry and anything else he could get at the time. 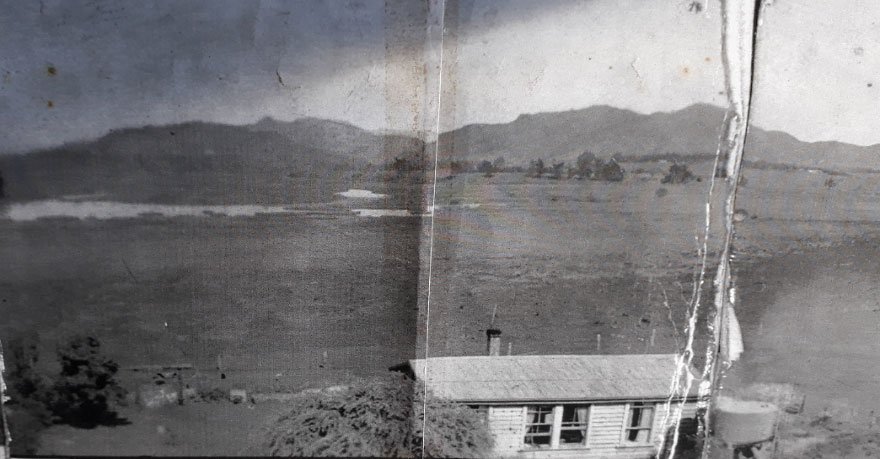 The Emerton home in 1939 with views across the swamp land to the north.

Building materials for the house were transported from Waihi Hardware to the north end by truck, and taken along the beach by horse and cart to its site.

The four children went to Katikati Primary School. They took a canoe to cross the estuary to Athenree, walked across Koutinui  Pa site, and if they were lucky they caught a ride with Mr Rapley on the cream lorry whereby he dropped them at the rail station below Athenree Homestead.  There the children caught the train to school. 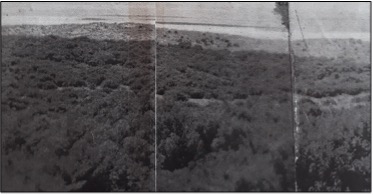 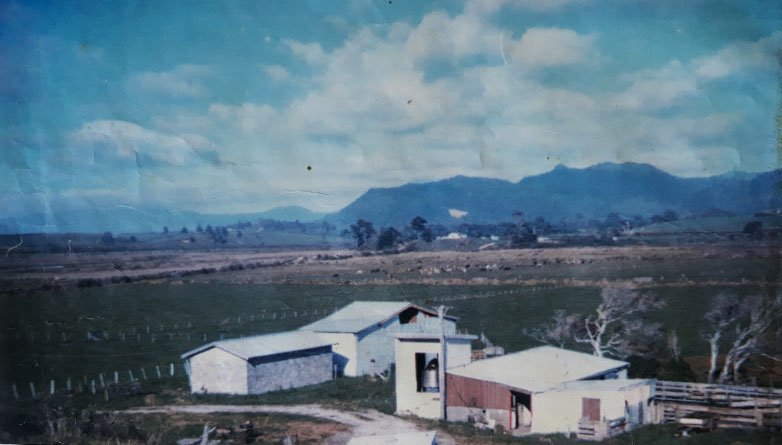 The  Hanlen home looking across Emerton Road  in the 1960s into the area where residential development incurred fifty years later.

There was  a new vat stand. There were no more cream cans as now the  milk was collected by tankers.

Len Emerton’s  daughter Muriel met Hank Hanlen at teacher’s training college, and they were married in 1948.

They bought the Emerton farm in 1958. Hank Hanlen was Principal of the earlier Waihi Beach School before and after it was moved to the site where the school is today.

Hank continued farming and teaching until 1963 when he gave away teaching to farm full time. His mother in law Betty had retired to Dillon Street. Muriel and family moved into the family farmhouse.

Hank was very community minded and over his time was a member of the Waihi Beach Fire Brigade. He had to retire from the brigade when he moved to the farm as he couldn’t hear the siren.

He was a trustee of the Waihi Arts and Museum Centre  and a founding member of the Lions Club of Waihi Beach. He was a keen gardener and enjoyed Maori carving. He spent time learning with Pene Taiapa, a renowned carver in Tauranga and he produced carvings for Westbrook Primary School in Rotorua.

Hank has written several historical papers and two books about the history of Waihi Beach. 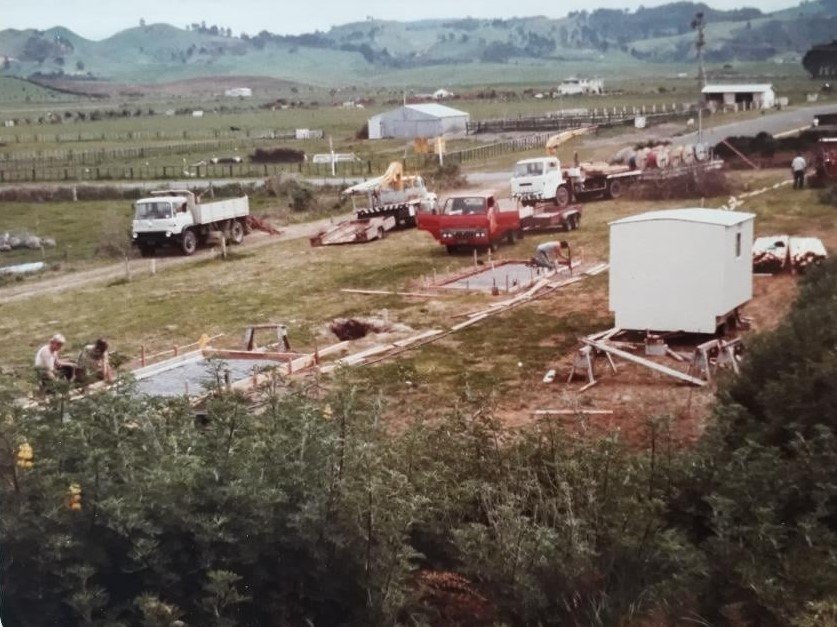 Seaford Caralease Park, built  in 1982 by Hank Hanlen, was named after the school that Len Emerton attended in England.

In the background to this picture can be seen Emerton Road and the Waihi Beach Airport.

A newspaper article, date unknown, describes the rationale behind the project.

“Planning permission for the development of a new concept in camping grounds at Island View was granted by the Tauranga County Council yesterday.

The concept involves a camp at which each site would have its own ablution rather than communal facilities and where caravan owners would be encouraged to lease sites on a semi-permanent basis.

A conditional use application for the venture was lodged by the Hanlen Family Trust, which manages the rural B-zoned property of 9.5 hectares opposite the intersection of Emerton Road and Hanlen Avenue at Island View.

Mr A. C. Halen said it was intended to develop 60 sites arranged in ten blocks of six. At the centre of each block there would be a cluster of individual buildings each containing shower, toilet, basin and hot water. Sites would be enclosed by hedges for a boat, awning, caravan and car on each site.

Mr Hanlen said he had hoped to create a family atmosphere capitalizing on the enjoyable side of caravanning without the inconveniences of overcrowding and a lack of privacy usually associated with caravan parks. No provision was made for tents, and it was hoped sites could be leased on a long –term basis.

Mr. Hanlen said it was not intended to create a “trailer park” and said that he envisaged people leasing sites for use at weekends and holidays, thus doing away with the need for towing boats and vans to Island View each time.

There were four objections to the application, all from the other camping ground operators in the Bowentown, Athenree, and Waihi Beach locality. They were concerned mainly with the threat of competition, saying their facilities were rarely fully occupied, and that an additional ground would only erode the situation further.”

The Waihi Airport was built in 1975 when the area was subdivided. Ralph Dell asked Hank Hanlen if one of the sections could an airstrip.

Civil Aviation ran feasibility tests, agreed and a hangar was built. The swamp- based landing strips had to be drained.

It was put on the market in 2015 and there was a plea from Sport Aircraft Association that it remain an airfield. Waihi Beach Flyers who are the current owners have maintained it as such.

0.58 miles
The landscape across the reserve land below Douglas Littlejohn’s farm in the 1940s. Koutinui (the original name) was focus of intense Māori occupation as indicated by significant archaeological finds in Read more...
View all