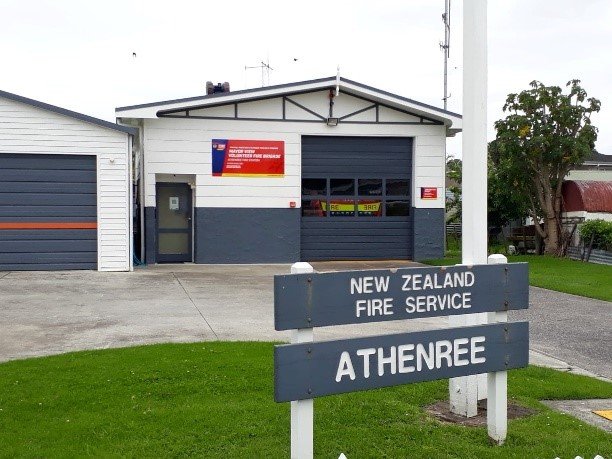 The founding committee purchased the land from Mr. Green ( a Browne family member) and volunteers built the shed in 1984 from founding members plans. The kitchen and sitting area were added later as was the veranda to the side, and the office.

The first fire engine was a trailer hitched to a brigade member’s ute carrying the portable pump and hoses. The trailer was built around an axle from Heather and Terry Christini’s old Hillman car. (The car itself was no longer working and had been set alight for firefighting practice.)

All the firefighters had tow bars on their cars, and when the siren went off, the first to arrive at the garage would hitch up the trailer. Later the brigade got a water truck, and after that a Land Rover Fire Appliance.

The siren was on a pole near the camping ground and tested at 12 p.m. each Saturday. Someone had to get a box from the garage and climb onto it to activate it. 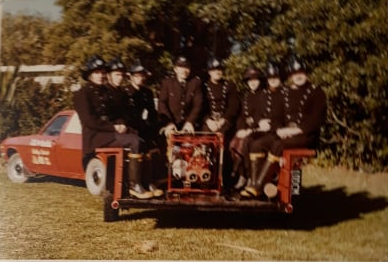 The foundation members of the Athenree aux Fire Brigade firefighters aboard the first Athenree “fire engine” in 1977, on a trailer hitched to a brigade members ute.

In 1977 a remit was submitted to the Fire Service Conference by the Athenree aux Fire Brigade for woman to be recognised for Service Honours.

Uniforms were “scrounged” and the woman, like the men, had helmets, steel capped knee high gumboots, woollen trousers and big heavy hot coats.

The women made their own dress uniforms for formal occasions – long black shirts, white shirts and bow ties.

Keith Birchall put reflector tapes along the side of the engine so that it was more visible. This practice was later adopted nationally by the New Zealand Fire Service.

There is a plaque on an original wall inside the building which says
In Memory of Keith Birchall
Founder and first C.F.0.
Athenree
5 July 1975 to 22nd May 2003.

Today the brigade has 28 members, seven being women.

0.28 miles
The Athenree Ford ( also called the Bowentown Ford) When the road from Tauranga was built in 1881 the only thoroughfare to the commercial end of Waihi Beach was through Read more...

371 feet
Doctor North Memorial Reserve The reserve was named after Allan North 1933 – 2007. He was a retired resident who had received an M.B.E for contribution to others during his Read more...
View all