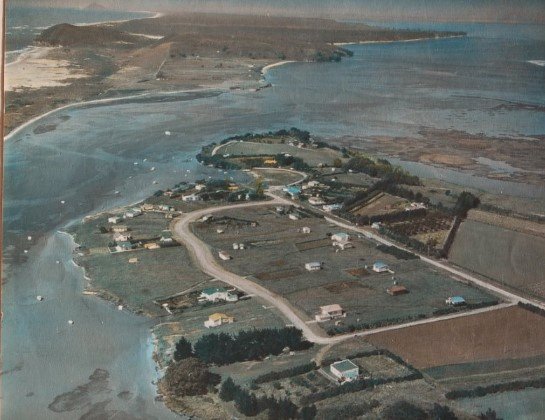 The first non Maori dwelling in the area was Tin Pot Castle, built by a negro believed to be called Toppins.

Mr Harley Senior developed a trading post and boarding house near the domain after settling in 1871. He expanded Tin Pot Castle. It had a well, a blacksmiths forge and cattle yards.

George Vesey Stewart was allocated land from the Crown in 1874 to form Ulster settlements and some of this was in Koutinui (as Athenree was then known.)

Captain Hugh Stewart and his wife Adela, who emigrated in 1878, named their homestead after the district of Athenree in County Tryone, Ireland.

George Vessey Stewart was more successful in developing Katikati and Te Puke settlements than Athenree. By the 1930s the land was in the hands of other settlers who made their living through agriculture, and small fishing and commercial businesses – some being John ( known as Jack) Garde-Browne, Wallace Rapley, Fred Harley, Dick Rolleston.

After the 1930s depression the Harleys sold their land and took up commercial fishing. 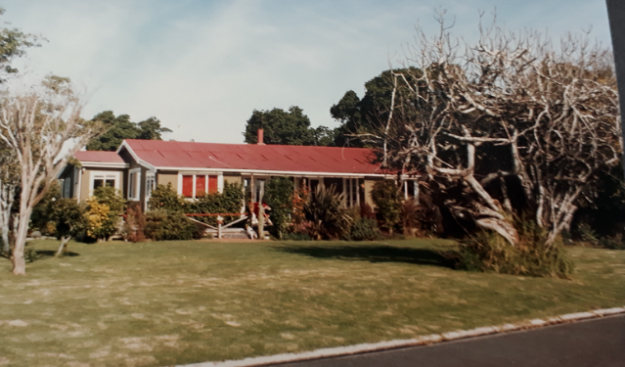 The Goodyear’s (photo 1965) bought the Tin Pot Castle land from David Nichols and lived there from the 1940s until mid 1960s.

Original pitsaw timber and hand forged nails from the Tin Pot Castle were still in the house at the time.

Where a smithy stood bits of old iron and rusty horse shoes have been found , and a subsoil like rock track that vehicles used on their way to the smithy.

“ In the 1950s, the acre included a little house with four small rooms, replacing the previous Tin Pot Castle. We added two bedrooms on the right, and two small rooms and a verandah on the front.

I was allocated a tiny room that had been the front porch, always referred to as the dog box. There was a dunny out the back, which meant that the vegetables and fruit trees grew well.

We gave the street the name of Waione, said by my father to mean “sound of the surf.”

The road had to be adjusted to accommodate the now hundred year old fig trees on the front of the section. 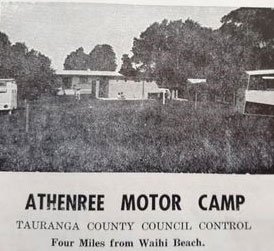 In 1933 David Nicols purchased the domain and Tin Pot Castle. He established a camping ground.

Whilst he was employed by the Athenree Forestry Department, he planted the trees which beautify the present camping ground and domain.

David Nicols sold the motor camp to the Tauranga County Council in 1963.

The rear of the camping ground which backed into the mudflats was planted in trees which shaded the four long-drop toilets: two Ladies and two Gents.

The toilets were painted black with breasole which made them smell better. The blue gum trees became a hazard as branches fell off in heavy winds. However, the Pururi outside the hot pools is still there today.

The cook house consisted of two army huts joined together, measuring 4.8 metres by 2.4 metres. It had three sinks and four single electrical hot elements plugged into electrical hot points. The hot water supply was a Zip ten litre cylinder. The laundry was a used ringer attached to a wooden open bench.

Water was collected from a five metre deep well with a wooden top, pumped by an old hand pump on the deck. 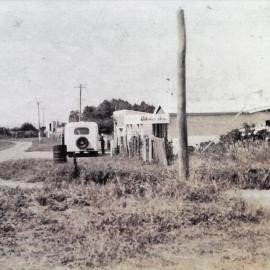 Keith and Pat Harwood arrived in 1946 having bought a school bus run contract.

At the Waione Road bend Keith Harwood opened a store. This store was built like a general store of the period and customers came inside to buy their goods.

The first shop at Athenree in the 1920s was that of Jackson with a 90% Maori trade.

This was replaced by a shop in a garage on Athenree Road. None of these were operating when the Harwood’s arrived.

The Haywood dairy-cum-general store received their goods in bulk which had to be bagged on into smaller quantities for resale (flour, rice, etc.) Locals recall the flour was stored on boxes lined with flattened out kerosene tins to keep out mice and rats.

Billy Pio, a farmer from Bowentown, brought his milk to the store for redistribution. This was initially in customer’s personal containers. 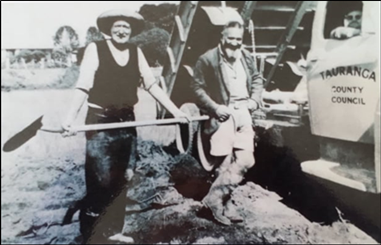 The domain was reclaimed from the sea in the 1950s when Waione Road was put in.

Harry Harley ( left) and Dick Rolleston helping with the reclamation using the spoil from the widening of Athenree Road.

299 feet
The Athenree Ford ( also called the Bowentown Ford) When the road from Tauranga was built in 1881 the only thoroughfare to the commercial end of Waihi Beach was through Read more...

0.32 miles
The Mayor View Volunteer Fire Brigade Athenree Station was built by residents who stepped for their community in 1975 to form the Athenree aux Fire Brigade.This was attached to the Read more...

0.38 miles
Doctor North Memorial Reserve The reserve was named after Allan North 1933 – 2007. He was a retired resident who had received an M.B.E for contribution to others during his Read more...
View all